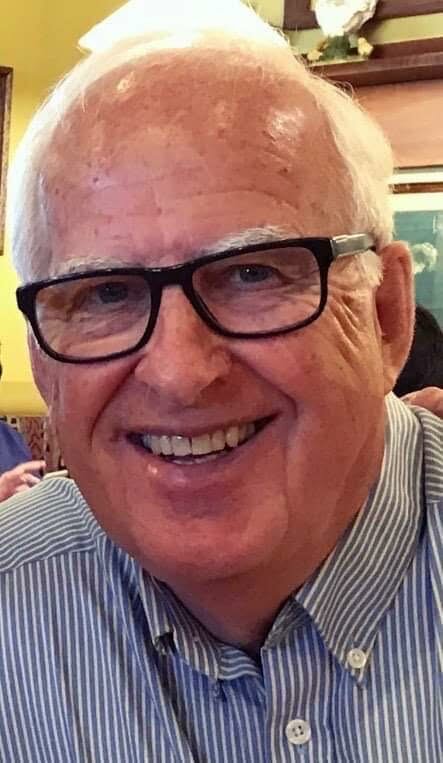 Eric’s life journey ended peacefully at the Palliative Care Unit of the Saint John Regional Hospital. The loss of Eric to an incurable brain tumor is a heavy sadness for family and friends. He has been a kind, loving parent, grandparent, husband and friend; we will miss his strength, determination, laughter and guidance.

Eric was the 2nd of four boys, born to his parents, Margaret (Briffett) and Bill Janes of Glovertown, NFLD. During his early years he worked at his father’s sawmill after school; he enjoyed boating, fishing with his brothers, playing hockey, and forming lasting friendships.

Eric’s career as a Radio Operator began with 2 years in Schefferville, QC, followed by 15 months in Roberval, where he met his wife Genevieve Simard, mother of their two children, Sandy (John Sullivan) of New York City, and Kevin of the Dominican Republic. Eric and Genevieve lived in Montreal for approximately 7 years, and then moved to Halifax, where his work changed to Marine Traffic Regulator for the Canadian Coast Guard. They then moved to Saint John, where he continued with the Coast Guard Service and supervision of Fundy Traffic for 20 years.

Eric, enjoyed skiing, where he met his current wife, Barbara Gibson. Together they enjoyed their shared families, welcoming Barbara’s boys; Jason Dickie (Shelly) now living in Swift Current, SK, and the late Peter Dickie (Pam Titus) of Long Reach, NB; who had been in the Navy for several years. Eric enjoyed outdoor activities, especially sailing with his brother, Robert, in the weekly races at R.K.Y.C.. He expanded the garden area on their property, helped plant more evergreens and mildly complained that Barb managed to fill all vacant spaces with more plants. He was a dedicated gym member for 20+ years, first at the Aquatic Centre and then at Body Plus in Rothesay, walked their Golden Retriever for long distances and also found time for some distance running.

Their household was busy with Barb’s home based office, and their four teenage children who were working, studying, travelling to faraway places, and still finding time to visit or stay with them. Those visits by the young adults were treasured by both Eric and Barb. Barb’s mother who suffered from Alzheimer’s also lived with them for her last 3 years; Eric was amazingly helpful with her, she called him, “that nice young man”.

Eric and Barb swam with the Saint John Masters swim team for several years, and managed to compete nationally and internationally. They didn’t earn big medals, but the team experience was excellent.

Eric and Barb enjoyed travelling with three trips to Europe and yearly visits to New York, to the Dominican, to NFLD and to Saskatchewan, to visit family.

Besides his wife of 25 years, and children, Eric is also survived by his brothers; Robert Janes (Angela) of Moncton, Gerald Janes (Joan), and Harold Janes (Terrie) of Glovertown, NFLD., beloved grandchildren; Julia, Jenna, and Kate Dickie of Long Reach, Taylor and Ryan Dickie of Swift Current. Eric has greatly enjoyed the grandchildren who have visited as often as they could. He had enjoyed swimming with his children when they were young and enthusiastically did the same with the grandchildren. He is also survived by several nieces, nephews, and extended family and friends.

Besides his parents, Eric is predeceased by his step-son Peter Dickie, and sister-in-law Lucie Fournier.

We have lost a lovely man who will be greatly missed. Our family would like to thank the nurses and doctors at S.J.R.H. for their prompt, caring and kind service provided to both Eric, and his family, the Emergency Dept., the Neuro-Unit (4BS) and the Palliative Care Unit (4CS). We thank the staff member who beautifully sang Newfie songs while taking Eric down 4 floors for an appointment! We also remember the gratitude, the late night phone updates provided by Nursing staff of Palliative Care to family living at a distance. Special thanks to Dr. Robichaud, Dr. Kolivas, Dr. Fenwick and Dr. Morse.

Arrangements are under the care of Kennebecasis Community Funeral Home, 152 Pettingill Road, Quispamsis (506-849-2119). Funeral Service will be held at St. David’s United Church, 7 Gondola Point Road, Rothesay, on Saturday, October 8, 2022, at 1PM. For those unable to attend, Eric’s funeral service will be livestreamed and can be viewed at www.saintdavidsunited.ca

For those who wish, remembrances may be made to the Canadian Cancer Society or the Saint John Regional Hospital Foundation. Online condolences may be made at www.kennebecasisfh.com.

Share Your Memory of
Eric
Upload Your Memory View All Memories
Be the first to upload a memory!
Share A Memory