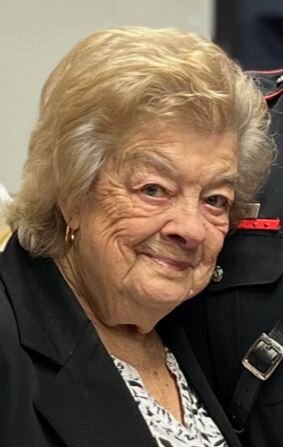 It is with heavy hearts that the family of Patricia Clarke, wife of George Clarke, announces her passing which occurred on Thursday, December 15, 2022, at the Saint John Regional Hospital. Born on May 18, 1933, in Lancashire, England, she was the daughter of the late Stanley and Edie Johnson.

Patricia, better known as Mumsy or Mum, was a strong, loving woman. Mum was social and loved to meet people. She was the type of woman who would call up a famous comedian to introduce herself. She was fearless, strong and an incredible role model for her children. Mum and George (Dad) met each other by chance on a ferry between Germany and England, after spending one day together, they were engaged. George proposed to Patricia through a Christmas card and they would have been celebrating their 68th anniversary in January. Patricia was a lifetime member of Legion Branch 58 and organized a lot of fundraising efforts for the Legion.  Mumsy was incredibly proud of being a mother and will be remembered as a devoted grandmother who took great pride in seeing her grand and great-grandchildren grow.

Share Your Memory of
Patricia
Upload Your Memory View All Memories
Be the first to upload a memory!
Share A Memory