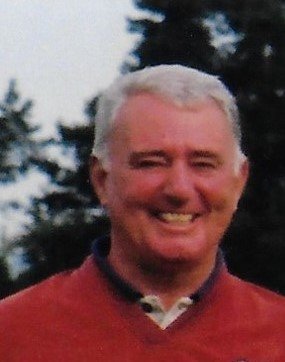 It is with great sadness that the family of William (Bill) Robertson Mayberry Sr., announce his peaceful passing at his home on April 6, 2021. He was a son of the late Alexandra Mayberry.

He was born in Paisley, Scotland on July 14, 1940, where he remained until the age of 24.  After being awarded the British Constructional Steelwork Association’s Prize Scheme Award for Structural Engineering, he emigrated to Saint John, NB in 1964 where he worked as the Chief Engineer at Ocean Steel for 16 years.  From there, he started W.R. Mayberry & Associates, his own engineering consulting firm, which he successfully ran for 18 years.

An avid golfer, Bill was a member of Riverside Country Club for 40 years.  The highlights of his golf career were getting TWO holes-in-one and winning the Provincial Family Classic Tournament with his son, Duncan, in 1991.

Upon his retirement in 1998, he enjoyed travelling with his wife, Anne, and golfing as much as he could.  A master crossword puzzle solver with the best sarcastic sense of humour, he will be missed by friends and family alike.

The family would like to extend a special thank you to Dr. Nava for his exceptional care and concern, and to nurse extraordinaire/daughter-in-law, Melody Mayberry who went above and beyond to make Bill comfortable.

As per Bill’s wishes, there will be no visitation or service.  Arrangements are under the care of Kennebecasis Community Funeral Home, 152 Pettingill Road, Quispamsis (849-2119). For those who wish, remembrances may be made  to a charity of one’s choice.

Share Your Memory of
William
Upload Your Memory View All Memories
Be the first to upload a memory!
Share A Memory