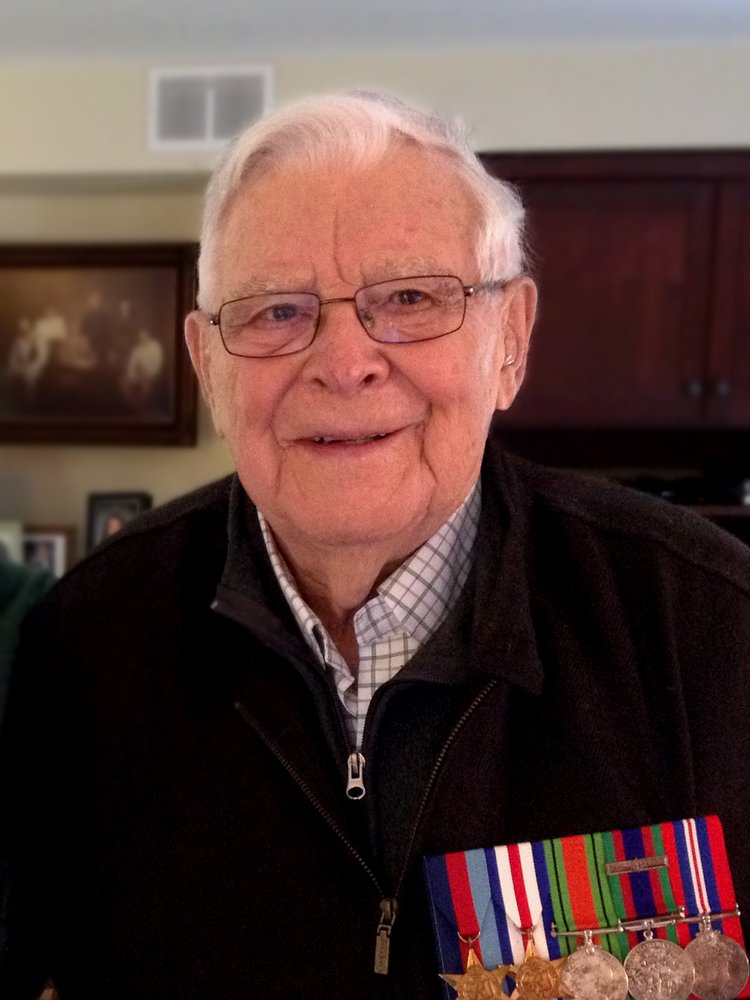 The family of Lionel Cook announces his peaceful passing from natural causes at Kingsway Care Centre, Quispamsis, N.B. on February 13, 2021, at the age of 100 years.

Born in Harvey, NB, Lionel was raised in McAdam, NB. He graduated from Normal School and, in turn, taught in Thomason Corner, NB, Little’s Settlement, NB, and was principal of the first graduating class of Meductic High School.

He served in the RCAF and was seconded to the RAF during WWII, specially trained as one of 32 radar operators on D-Day in the English Channel. Upon returning to Canada he studied at UNB, Mount Allison (BA), and graduated from Queen’s University with a B.Comm. He resided in Toronto, working as the tax expert for Moore Business Forms. While in Toronto he met and married Mildred Croft. They moved to Halifax, where he was employed by Burroughs Business Machines Ltd until 1970 when he left to develop real estate in the Saint John area until 1978. He worked as a financial advisor until retiring in 1994.

Lionel and Mildred very much enjoyed their cottage at Oromocto Lake and their winter home in Pinellas Park, Florida. They enjoyed an active social life involving golf, curling and bridge. Lionel also enjoyed shuffleboard and sports in general. He was a voracious reader and enjoyed global newspapers and various genres of novels.

Active in community projects he was a board member of Salvation Army, CNIB, St. Paul’s Church, Rothesay and a member of Rotary International.

Our father felt very well cared for by the exemplary staff at the Kings Way Care Centre in Quispamsis and the family echoes this sentiment.

Arrangements are under the care of Kennebecasis Community Funeral Home, 152 Pettingill Road, Quispamsis (849-2119). Due to the ongoing pandemic, there will be no visitations, however, a livestream of the funeral service will be held Wednesday, February 17, 2021, at 1:00 P.M.from https://www.stpaulsonthecommon.com/live

On the left hand side of the obituary, click "Lionel Cook Funeral Service" and it will take you directly to St. Paul's Livestream.

Interment will take place at a later date. At Lionel’s request, donations can be made to the Salvation Army or the CNIB, or a charity of the donor’s choice.

Share Your Memory of
Lionel
Upload Your Memory View All Memories
Be the first to upload a memory!
Share A Memory