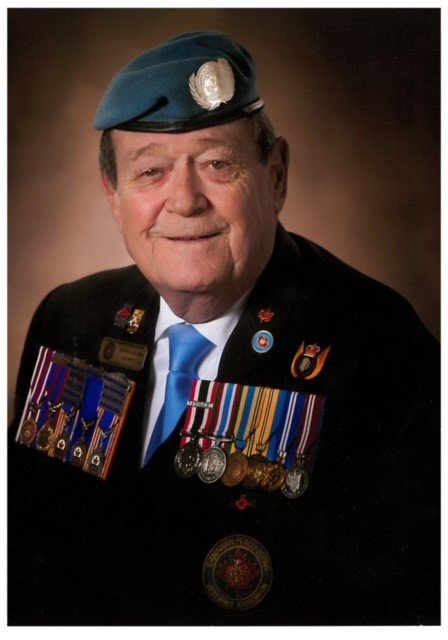 It is with great sadness the Canadian Peacekeeping Veterans Association announce the peaceful passing of Norman Gaillard on 9 February, 2021.

Born in Springhill, NS, he was the son of the late Phyllis (Green) and Julien Gaillard. Norman was predeceased by his first spouse, Lydia (Bierhoff), and his second spouse, Dorina (Owen).

He is survived by his long- time close companion and friend Kathleen Crawford, as well as daughters Diana Gaillard (Gilbert) and Barbara Gaillard (Jacques).

In his younger years, Norman joined the Royal Canadian Army Medical Corps, trained, and served as a medical technician. He went on to train and serve as an Aeromedical Evacuation Technician. Norman served for twelve years, with many tours of duty, including Germany, Raffa, Egypt, Beirut, Lebanon, and Cyprus. His postings included CFB Gagetown, CFB Calgary, and Edmonton. After taking a medical discharge from the Canadian Forces, Norman went on to work at several businesses in New Brunswick as well as starting a couple of businesses himself in synthetic foam and business supplies. Always helping veterans throughout his life, he was involved and very active in several veteran related organizations.  including 55 years with the Royal Canadian Legion. Norman held many positions with the Legion, including Zone 1 Commander, President of Branch 58, Poppy Chairman, and Service Officer. He was made a lifetime member of the Legion in 2012. He was very active as President of the 58 Legion Court initiative helping to house low- income veterans. His community efforts were also recognized with the award of both the Silver and Golden Jubilee medals. In 2014, he founded the Southern NB Chapter of the Canadian Peacekeeping Veterans Association. As President of the Chapter, his leadership has resulted in a strong membership with the fastest growing chapter in the Country, resulting in the Chapter being named the Best Recruiting Chapter for 5 consecutive years from 2015-2020. He personally assisted hundreds of veterans in his volunteer work with the Chapter.

There will be no visitation or memorial service, as per Norman’s request.

At the going down of the sun, and in the morning, we will remember them.

Share Your Memory of
Norman
Upload Your Memory View All Memories
Be the first to upload a memory!
Share A Memory