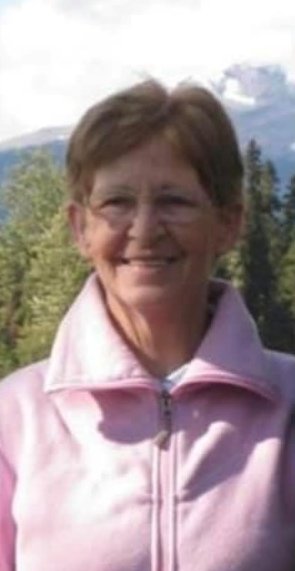 It is with great sadness that the family announce the passing of Phyllis Jean (Fulton) Hetherington. Phyllis was born in Minto, on April 22, 1948. She was the daughter of the late Francis and Ruth (Bishop) Fulton of Chipman, NB.

Phyllis was a wonderful wife and mother. She will be deeply missed by her husband Richard and their children; Derek (Gina) Hetherington of Smithers, BC, their daughter Terry (Chris) Friars of Quispamsis, and their son Kyle (Danielle Douthwright) Hetherington of Hampton.

Phyllis especially loved her grandchildren; Spencer Walton of BC, Cameron Friars, Joanna Hetherington, and Emily Friars. She knit hats for them and always gave hugs and treats when they came to her house.

Phyllis, you will be forever loved and missed.

Arrangements are under the care and direction of Kennebecasis Community Funeral Home, 152 Pettingill Road, Quispamsis (849-2119). A private service celebrating Phyllis’ life will be held at Kennebecasis Community Funeral Home Chapel. For those unable to attend, the funeral service will be livestreamed on Phyllis’ obituary at www.kennebecasisfh.com on Tuesday, February 23, 2021, at 1:30 PM. Interment will take place at Hampton Rural Cemetery at a later date.

For those who wish, remembrances may be made to a charity of the donor’s choice.

Share Your Memory of
Phyllis
Upload Your Memory View All Memories
Be the first to upload a memory!
Share A Memory