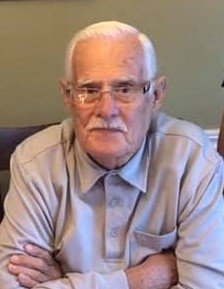 It is with great sadness the family announces the passing of David Logan husband of Cynthia (Osborne) Logan of Saint John, NB, which occurred on August 1, 2020 at his residence. Born on March 8, 1943 in Sunderland Tyne and Wear, England he was the son of the late James and Dorothy (Melton) Logan.

He was an electrician by trade and started his career with the British Merchant Navy and worked his way up to Chief Electrical Officer. When he settled down in Saint John with his family, he was employed with the Port of Saint John maintenance department for about 20 years and then became employed as one of the planners at the Saint John Shipbuilding & Drydock during the Frigate Program years. He was also a very proud member of Local 502 IBEW and Local 273 of the ILA during his working years.

When Dave wasn’t working, you could always find him working on a project in his shop, finding something to fix on the property and tending to his beautiful garden. Dave also adored and loved his grandchildren and took great pleasure in their scholastic and athletic accomplishments. In his last years, Dave always enjoyed sharing photographs and stories of the grandchildren and the garden to the wonderful staff at the Saint John Regional Hospital Dialysis Unit.

Besides his parents he was predeceased by brothers-in-law: Arthur Henderson & Michael Osborne; sister-in-law Candace (Osborne) MacDonald and several aunts, uncles and cousins.

By request there will be no funeral home visitation or service. Arrangements are under the care of Brenan’s Funeral Home 111 Paradise Row, Saint John, NB, (634-7424). For those who wish remembrances to the Heart and Stroke Foundation of NB and Dialysis Unit Saint John Regional Hospital. Online condolences and remembrances may be placed at www.brenansfh.com

Share Your Memory of
David
Upload Your Memory View All Memories
Be the first to upload a memory!