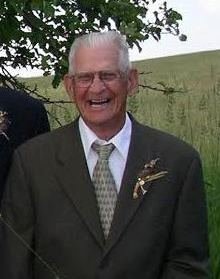 It is with heavy hearts that the family of Henry Roy McAdam announces his passing, which occurred on Tuesday, December 31, 2019 at Ridgewood Veteran’s Wing. Born October 7, 1924, he was a son of the late Stuart Bancroft and Lillian Doris Packer. Roy served as a member of the Canadian Army in World War II. He retired from the Canadian Pacific Railway.

Aside from his parents, he was predeceased by his wife Jean Elizabeth (Bartlett) McAdam; brothers Jack and Les McAdam.

The family would like to extend a special thanks to the doctors, nurses and staff of Ridgewood Veteran’s Wing.

Arrangements are under the care of Brenan’s Bay View Funeral Home, 1461 Manawagonish Road, Saint John, (634-7425). A private, family graveside service will be held at Woodman’s Point Cemetery. For those who wish, remembrances may be made to a charity of the donor’s coice.

Share Your Memory of
Henry "Roy"
Upload Your Memory View All Memories
Be the first to upload a memory!