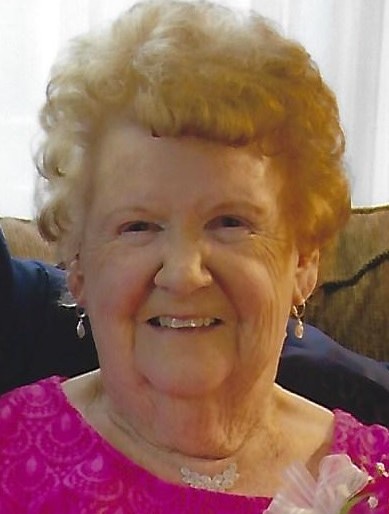 Surrounded by her loving family, and after a lengthy illness, Buda Ellen Courser (neé Barton), wife of 63 years to Roy Franklin Courser, was called home to be with her Heavenly Father on Wednesday, June 5, 2019.

Born October 20, 1935 in Minto, New Brunswick, she was the daughter of Ronald Claude Barton and Doris Mae Barton (neé Barton).  Buda was a charter member of Fundamental Baptist Church and taught Sunday School, worked in their children's program and sang in the choir.  Roy and Buda met when she was only 15, were married when Buda was 21 and enjoyed a wonderful life together.  They spent winters in Florida for several years following their retirement and often took cruises to various destinations with a variety of their friends.  During her lifetime she worked as a secretary at the Department of Social Services, JD Irving, at insurance companies in both Fredericton and Saint John, Pilkington Glass, and also ran a home daycare for several years.  Her favourite job, however, was mother to her three daughters, Shelley Courser, Lori Courser and Jennifer (Dan) Basham and grand-mother to her grand-daughter, Karyss and her grand-son, Riley.

Buda was predeceased by her parents and, in addition to her husband, daughters and grandchildren, is survived by her sister, Sharon Miller of Lincoln, NB and brother, Eugene (Glenna) Barton of Sherwood Park, AB, as well as several nieces and one nephew.

The family would like to thank the many people who helped care for Buda and her family during her final months: Dr. Christopher O'Brien, Nicole and Lisa of Extra-Mural Care, Tara from Homecare by Design, Sydonyia Crossman, Bobby's Hospice, Pastor Keith Boss, the pastoral staff and the whole church family of Fundamental Baptist Church.

For those who wish, remembrances can be made to the Fundamental Baptist Church Benevolence Fund or Bobby's Hospice.

Share Your Memory of
Buda
Upload Your Memory View All Memories
Be the first to upload a memory!